World War I Vet Saved by the Measles 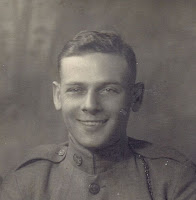 Leo Metzner, the father of my dad's first cousin, was in the U. S. Army in World War I. The following article was written as a tribute to him at age 88. It was written in 1983 and published in the Las Vegas Sun newspaper on Veteran's Day.

The article describes some of his adventures while in England and France in 1917 and 1918.

Let's just say that a case of the measles, contracted while being shipped over seas - saved his life.

Thank you Leo, for your service.