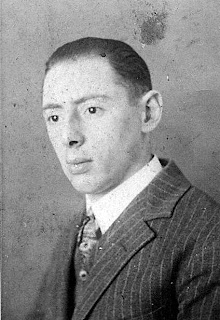 Theodor Braunhart was the youngest son of Alexander and Helene Braunhart. Born in 1898 in Schubin, Germany, our earliest evidence of him in adulthood is a postcard sent from the Ukraine, where Theo as he was called, served as a member of the German Army. After his stint in the Army, it appears that he and his brother Phlipp were together in Berlin.

Below is a letter that Theo wrote to his sister Anna, who was living with her husband Harry and daughter Mildred in Brooklyn, New York.

In the letter, written in 1920, Theo states that he has been quite ill for three years, which would suggest that he became ill while serving as a soldier.

Theo, it seems was ill the majority of his life. He spent many years in the Shanghai Ghetto, and later in Palestine. He contracted tuberculosis later in life, and in his return to Germany after World War 2, was unsuccessful in reconnecting with his wife Lucie.

Below are the 4 pages of the original letter, followed by the English translation. 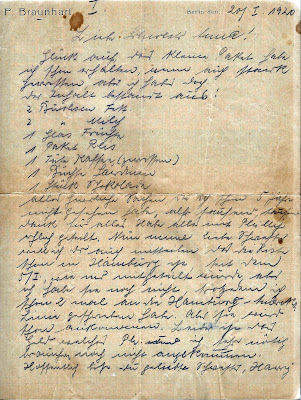 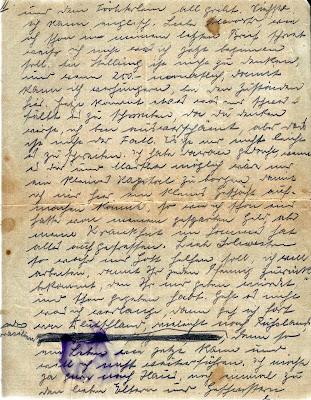 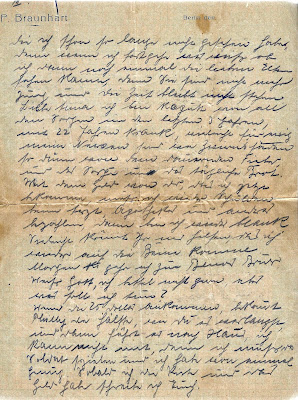 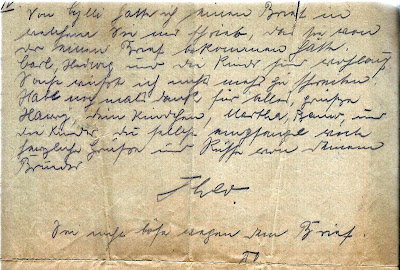 Translation of above letter. Again, thanks to Matthias Steinke for the excellent translation!

Luckily, I already received the little package, although it was heavily torn, but I have it.

All beautiful things I haven’t seen for already 5 years. So a thousand, thousand thanks for everything. I have everything honestly shared with Philly. Now my dear sister I have to tell you that the box is already in Hamburg, already since the 5th of January, as it was reported to me, but I haven’t it yet, although I already wrote 2 times to the Hamburg-America Line. But finally, it will get it.

Unfortunately, the money which Philly and I really need didn't arrive yet.

I hope you, beloved sister, Harry and your little daughter are alright. You see, I can speak English.

Dear sister, as I wrote in my last letter I do not know how to begin. A job is not available and for 250 per month, I can starve due to the situation here. Now comes something that's hard to write for me because you will probably think, I am unashamed, but that’s not the case. It is not easy for me to write it. I thought if it would be possible, that you and Martha loan me a small asset, so that I can start here a small business, as I already had one with my saved money, but my illness in the summer took everything.

Now my dear Sister so help me God, if you help me, I will work and pay every penny back you give me and already had given. If its not possible what I asking for, the I have to go away from Germany, maybe to Russia or Brazil, because such a life like now I can't and won't continue. I would love to go home, again to the beloved parents and siblings. I haven't seen them for so long. If I go, who knows if I see our dear parents again, because they are no longer young and the time does not stand still.

Dear Anna, I'm broken from all the concerns in the past 3 years, with 22 years ill, maybe forever. My nerves are like twines. so thin from the constant fever, and concern for the daily bread. With the money from you, which I now get, I have to pay my debts at the doctor, pharmacist and others, and then I was sick again.

God knows I do not like begging, but what should I do?

If the 25 dollars arrive, Philly will get half, as you wanted, and then he went home, I cannot, because I have to play Soldier and I got fed with it.

When I get the box and the money I will write to you.

From Cilly I had a letter in which she wrote that she received a letter from you. Carl, Hedwig and the children are well.

So, I don’t know what else to write.

Again many thanks for everything, greetings to Harry, your child, Martha, Bernard and their children, you yourself also receive warm greetings and kisses from you brother

Don’t be angry because of the letter.
Posted by Kenneth R Marks on Monday, December 03, 2012
Family Names Braunhart