The Surreal Photo of the Braunhart and Brunn Wedding

With complete reverence and respect for the participants in this wedding, especially Frieda Braunhart and Salo Brunn, the bride and groom, I have to say that this is quite the surreal wedding photo.  The photo was taken at their wedding in Berlin, Germany on May 12, 1926.

It reminds me somewhat if one can use their imagination, of the album cover for the Beatles' famous Sgt Peppers Lonely Hearts Club Band.  It almost looks like some of the photos were pasted in, as in the album cover.

Hopefully some of the activities of the day created some happiness, as the participants do not look like they are having a great time. 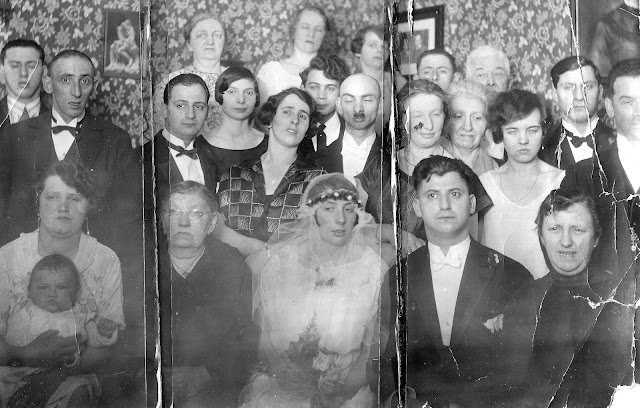 So let's identify who we can.  The bride is easy to pinpoint and she is of course Frieda Braunhart.  Next to her is her groom Salo Brunn. All the way to the left is the infant Horst Braunhart, in the lap of his mother Else Schmalenbach Braunhart, and behind Else her husband Philipp Braunhart.   In the middle of the photo (next to the bald man with his eyes closed, and behind the bride), is Frieda's older sister Selma Braunhart.  The bald man with his eyes closed is Frieda's brother Carl Braunhart, and next to him is his wife Hedwig Bukofzer Braunhart.  Directly behind Hedwig is another of Frieda's brothers, Theodor Braunhart.  The gentleman who is to the left of Selma Braunhart is Salo's brother Leo Brunn, and the gentleman way to the right who also has a bowtie on is another of Salo's brothers, Maurice Brunn.  Finally, next to Salo is his mother Frieda Brunn.


With appreciation to Miriam Brunn Matranga for providing this photo, and to Stuart Matranga for scanning it.
Posted by Kenneth R Marks on Thursday, August 16, 2012
Family Names Braunhart, Brunn