A Party for Lewin Jacob Braunhart


Our patriarch Lewin Jacob Braunhart had a long and illustrious career.  He was honored by his colleagues and friends along with his wife Wilhelmine Zadek Braunhart on the occasion of their 65th wedding anniversary, commonly known as the iron anniversary.

Below is a newspaper article written in the Die Deborah newspaper, which was the most important German-Jewish newspaper in its time.  The newspaper existed from 1855 through 1902.

This article about the Braunharts was published in January, 1901. 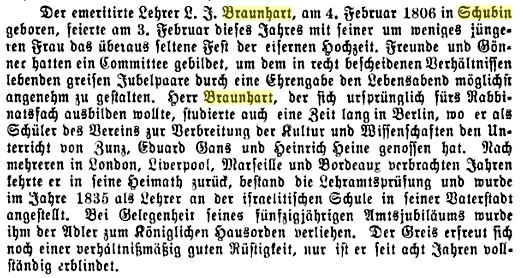 An English translation has just been done. In essence, the article states:

"The former teacher Braunhart, born on the 4th of February 1806 in Schubin, celebrated with his wife, who is  only a few years younger,  the rare event of the iron wedding anniversary. Friends and well-wishers formed a committee to organize a tribute for the couple. The evening of  the ceremony to honor their marriage was intended to be as nice as possible, as the couple themselves live a rather simple life. Mr. Braunhart, who initially wanted to become a rabbi, did study in Berlin for some time, where he enjoyed classes with Bunz, Eduard Gans and Heinrich Heine as a student of the Institute for the Study of Culture and Science. After some years in London, Liverpool and Bordeaux, he returned to his homeland and city of his birth, graduated as a teacher, and started to work at the Jewish school of Schubin in the year 1835. For his 50th jubilee as a teacher, he was awarded the royal eagle medal. The old man is relatively healthy, despite being completely blind for eight years."