Izzie Invented What? A Tribute to Isidore Heyman

Isidore went to his room and didn't reappear to the family for THREE days.  At that time in the late 1940s he was living with his daughter Mynette Heyman and her husband Henry Pound and their son Clyde.  When Isidor came out of his room with a huge grin on his face, he displayed for the family a necktie with an exchangeable knot that could be easily changed out as the wearer wished.  The clip-on tie was invented in Clinton, Iowa in 1928 - but this may have been the first exchangeable knot-based tie.  Who knows?

Isidore Heyman was my great grandfather. He was the only one of my great grandparents who was alive when I was. I do not remember him at all, except for a vague memory that he smelled funny. He died when I was only eight years old.

For some reason, for the past few years as I have been researching his history and stories, I have come to call him "Izzie," so as a nickname that he probably either never heard or didn't like, I will use that moniker fondly throughout his story.

Izzie was born in Posen, Prussia in 1866. Unfortunately I have not been able to pinpoint the exact city or town of his birth.  According to a marriage record, his father's name was Hyman Heyman, and his mother was Caroline. The marriage record states that her last name was "Bufsky" but I believe that it was a phonetic spelling. For some reason, yet to be proven, I suspect that her last name was Jacobowsky.

He immigrated to America in 1882 as a 16 year old young man. There is a very fuzzy story that his family were furriers, but there is no evidence of that as yet.

Ernestine Bernstein became Izzie's wife on July 19, 1893 in Manhattan.  Ernestine was the very first female Braunhart to have immigrated to America. She did so at age 17, unaccompanied and unmet at the Port of New York, in 1888.

Ernestine and Izzie had six children - Robert, for whom my father is named, died as a youngster from tuberculosis prior to 1910. Celia Heyman, my grandmother, was the oldest, followed by Martha, Arthur, Leo and Wilhelmine (who changed her name to Mynette because she hated her first name - and wasn't too fond of Minnie either).

Izzie was a very creative sort and had many interesting occupations. Early in his life in New York, he was a pocketbook manufacturer and registered a patent in 1887 for a leather coin purse. Throughout his life he was involved with leather goods manufacturing.

He sued the Eastern Brewing Company in 1898. He drove their horse drawn "beer wagons," and stopped another beer wagon with its horses out of control from running over a family. He was dragged for quite a distance and suffered many scratches and scrapes, as well as needing surgery on his skull. He carried the large indent in his head for the rest of his life.

Various other occupations included owning and operating a fish market, as well as operating a nickelodeon theater, where his daughter played the piano during the screening of silent movies.

Izzie owned a pool hall initially after moving to California, and then his creativity took over. He invented the metal stairs that came out of the trains as steps for passengers to embark or disembark. Unfortunately, he was not a great businessman and after showing his invention to Southern Pacific, they promptly had someone else manufacture them, and Izzie received nothing.

Back to his roots, Izzie formed the Bay Cities Bag Company. He invented the valise hinge that was used in doctor's bags, and was also used for many years in men's grooming kits. Below is a photo of the hinge, patented in 1921: 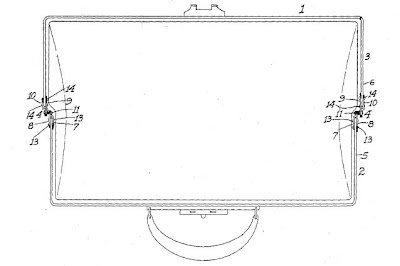 Izzie ran the Bay Cities Bag Company for nearly two decades, manufacturing leather purses, Boston bags and other miscellaneous leather items. He retired in the late 1930s and his leather goods business soon became a new business founded by his son-in-law Mervyn Marks. That company, California Optical Leather Company, existed for another 40 years under the tutelage of my grandfather Mervyn and his two sons, Robert and Merv Jr. 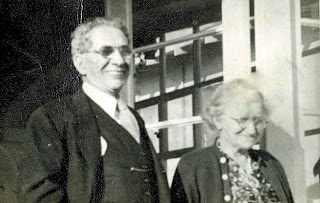