Bernhard Braunhart, the very first Braunhart to come to America (in 1857), settled in Southern California in San Bernardino.  He married Rosa Levison in San Francisco in 1884.  They had one son, Harry Braunhart, born in 1885.  Unfortunately Harry was committed to a state hospital for the mentally incompetent for most of his adult life.

Ben, as Bernhard was called, had several businesses, including saloons and grocery stores in San Bernardino.  He created an elixir called "Braunhart's Tropical Sauce" and won an award at the very first San Bernardino County Fair in 1880. 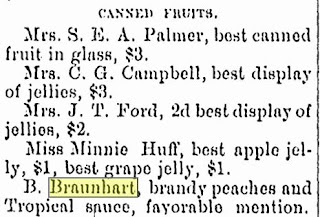 This sauce was sold by him in his stores and after his death in 1890, it continued to be manufactured and sold in Riverside, San Bernardino and San Diego for over 25 years: 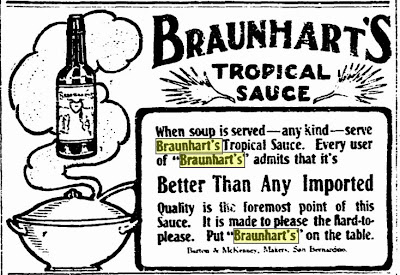 Unfortunately for Ben, sales of his"Tropical Sauce"and business failures led to marital problems and ultimately to his death by suicide in 1890.

It is surmised that my great great great Uncle suffered from depression and possibly his mental woes were passed on to his son.  Perhaps we will never know.