100 Years of Leather and the Tortoise and the Hare

My great grandfather, Isidor Heyman started the family business in the 1880s.  In his naturalization papers in 1888, and city directories in the late 1800s and early 1900s in New York, he was identified as a pocket book maker. He received a patent in 1887 for a leather purse: 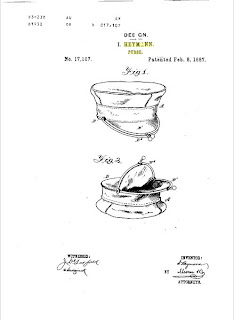 When he moved his family to Oakland, California in 1910, he started the Bay City Bag Company.  His sons Arthur and Leo worked at the company, and his son-in-law, Mervyn Marks was a salesman for the company.  This company manufactured leather purses.  Arthur learned to sew at his father’s company and later was a clothing designer and a seamster in both World War I and World War II in the Seabees.

Mervyn Marks picked up the family business in the mid-1930s and started the Marks Leather Goods Company.  His sons Robert and Mervyn, Jr. worked at the company. They primarily made key cases in addition to purses.

The company’s big break came during World War II, when it manufactured leather eyeglass cases for Rayban, who was providing sunglasses to the U.S. Air Force.  It was then that the company changed its name to California Optical Leather Company.

The company moved its manufacturing site to Castro Valley, California from Oakland in the late 1940s.  Mervyn Sr and his wife Cele had a home that was attached to the “shop” as it was called.

Robert designed many new eyeglass cases and had several patents, including these:

Mervyn Jr ran the manufacturing facility.  In the late 1950s, the company was bought by the two sons.  Mervyn Jr. left the company in the 1960s and Robert ran and increased the size of the company substantially until it was sold to a non-family member in the 1980s.  Robert was responsible for hundreds of designs.  I would venture a guess that the preponderance of eyeglass cases manufactured in the 1950s through the 1970s were his designs, many times "stolen" by other manufacturers, both domestic and foreign.

There are so many fond memories of the shop, as I worked there during my childhood and teen years.  The smell and feel of leather; operating the massive “clickers’ that stamped metal dies onto the leather and cut the cases, and  the chance to be around my grandparents, Mervyn and Cele every day, as well as  my Uncle Merv and Aunt Jeanne.

But the most important life lesson for me was to learn to be a “tortoise” rather than a “hare.”  As I stood every day at the “shaping” machines next to my grandfather, I always tried to beat him in shaping the most number of cases in an hour.  But like most kids, I fell into the trap of being the “hare,” where for 15 minutes I could out do him, and maybe for a half hour, but at the end of the hour, his production was always greater, as he plodded along, without interruption and without fanfare.