Did Grandpa Lie To Get Out Of World War I?

I have always wondered about the World War I draft card for my grandfather Mervyn Raphael Marks.  There have always been two things that bothered me about it.

The first bothersome entry was that he identified himself as a "farmer."  The second was that he had sole support of his mother, Mollie Raphael Marks.

Let's take a look at these two "facts."  First, below are the two pages of his draft card: 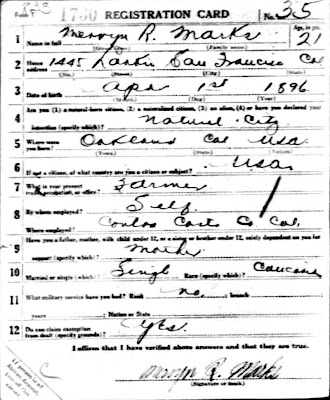 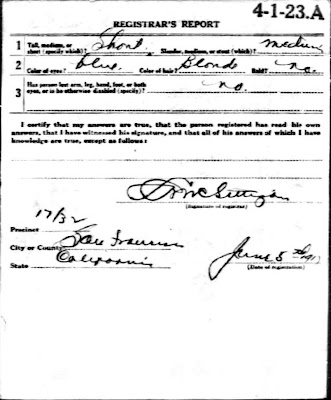 I'm sorry, but unless I am terribly mistaken, my grandfather was not a farmer.  He was a salesman.  And although his parents according to the 1910 census were not living together (I could not find his father anywhere), I do believe that they were together in 1917 (his father Joseph Marks, died in 1919).

In reviewing the rules for deferment for World War I, about 50% of the men who registered in the first registration (men 21 to 31 years old), received deferments, and sole support of a parent and critical agriculture employment were two factors in receiving a deferment.

So did Grandpa lie to get out of the draft? His son is still alive, but I don't think this would be something that one would be proud to admit to one's son. On the other hand, maybe his parents were separated and he did work on a farm - but I doubt it. I don't think I will ever know.