One wouldn't expect that car racers went very fast back in 1906. Apparently they did. My great grandfather William William Williams (yes that's his name) was crossing the street when a man racing a car on 5th and Market Streets in San Francisco rolled over him. He was mortally wounded after his head was hit by the differential. He died shortly after the "accident" at a nearby hospital.

How fast could cars go back then?  Here's the newspaper article: 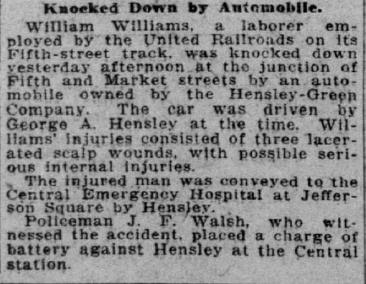 There was a positive outcome, however.  The perpetrator, Mr. Hensley, paid for William's son Ralph Victor Williams's business school education.