Fred, Ginger And My Cousin In-Law

Actually my ex-cousin-in-law once removed, but who's counting? Hal Borne (born Cecil Harold Steinborn) was a bandleader and composer of popular music, best known as the music director for RKO Studios for Fred Astaire and Ginger Rogers from 1931-1940. Later, he was the band leader for the Tony Martin and Ginger Rogers' touring shows. He also wrote the music for one of the last Marx Brothers movies "The Big Store" and was a songwriter ("Tenement Symphony", "I'm Building Up to an Awful Letdown"). Here is a photo of Fred, Hal, and Ginger on the set of "The Story of Vernon and Irene Castle" in 1939: 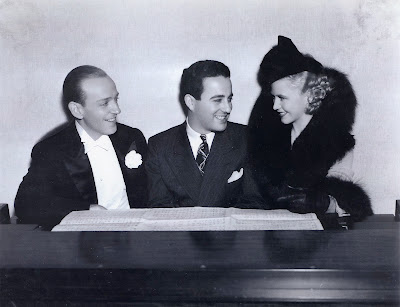 He was married to my father's cousin Gloria Metzner, whose stage name at that time was Gloria Dea.  She was a child magician; dancer in the Earl Carroll's Vanities in Hollywood and the Billy Rose Aquacade at the San Francisco World's Fair; and later an actress in several movies and serials.  She and Hal were married in the 1940s.  Here is a photo of them together in 1945: 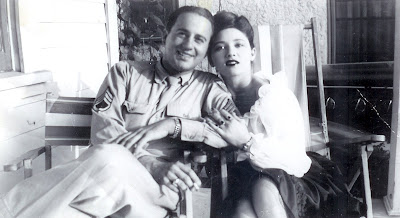