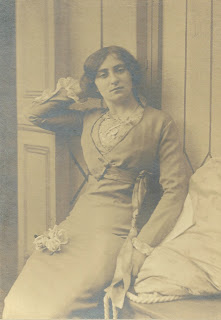 Anna Braunhart was the second girl (and the third child of Alexander and Helene Braunhart) to immigrate to America. At age 19, by herself, she made the voyage from Germany to America.  As her sister Martha did earlier, she worked in the home of Max Markheim and Cecelia Braunhart Markheim, Anna's cousin.  She met her future husband, house painter Harry Airman Tulman, in a paint store owned by her sister Martha and her husband Bernard Sternbach as he shopped for supplies.  They were married in 1915 and stayed together for 43 years until Harry's passing in 1958.

Together, Anna and Harry opened a hardware store.  While Harry continued painting houses for a living, Anna ran the business while raising 4 children.  Anna taught herself English by reading newspapers.  She learned the real estate business and went on to buy and manage several apartment buildings while also making money in the stock market. Overall, Anna was very accomplished for a self-taught immigrant.

The following quotes from her children and grandchildren describe this remarkable woman: 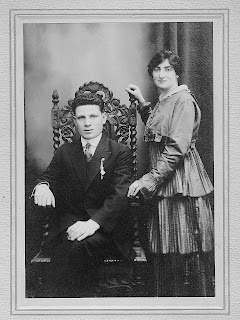 A few years before she passed away, Anna summed up her philosophy of how to live an honest life when she said in a taped interview:

"I believe that you have to live a good life and enjoy as much as you can and be honest and fair and square to everybody. You should honor your father and mother and everybody belonging to you. Don't take anything that's not yours. If you can't do good for somebody, don't ever do them any harm. That's the best way to be."

From granddaughter Martha Lesnitzer Zucker’s interview with Anna B. Tulman, taped in Brooklyn on August 31, 1983:

My father had to go to the mayor, they call it "to give consent" that I could go to America because I wasn't old enough to go without it. I think it must have been in 1909.

One day Harry Tulman came for a can of paint and asked me for a date and that was that. When I had my bunions removed, he came every day to see me in the hospital. We went to City Hall and got married. The Goldsteins, who were friends of Harry’s, made a wedding party for us in their house at 33 Chestnut St., in Brownsville.

My husband was a painter and didn't make much. One day I said to him, "let's look for our own store." I had $200.00; we looked for a store and found one on 18th Ave. The walls weren't finished and it was wet from the plaster but we had nowhere to go so we slept across the street. There was a shoe store, the name was Horowitz, so we slept over there and we paid them rent. When our store was finished, the walls still wet, we moved in over there, behind the store.   Whenever anybody came and they asked for something, I wrote down what they asked for and then I ordered it.  I have a big story to tell.

Anna’s Parents
My mother was a very good woman who had a hard life. She had 11 children, including a baby boy who died. My father was well educated.  I used to send money home to them. They didn't need it too much because my father used to be like a lawyer. People came to him who were in trouble of some kind - with their husbands or they had money problems. My father used to go right to court with them. He was like a lawyer here. He was very much educated.

His brother, Samuel Braunhart, was a state senator in San Francisco who was often in the newspaper. There was a big fire in San Francisco in 1906. My brother Jacob, who came to America with Martha, was there with my uncle when the fire broke out. Jacob carried my uncle out but he died after in the hospital.  My father had another brother. His name was Bernhard. He had a wife and a son.

Child Rearing
I hope you have the best life anybody could have, and after a while you'll have a family. You make your children to order, not by accident. I didn't know at that time how happy I was when I had those twins at the same time. I would wish it to anybody if they want to. So maybe if I had them at the beginning, maybe I wouldn't have any more children, but it's better it happened that way.

Before I had Mildred we didn't plan to have any children yet because it wasn't our time. So then the war came and they said, "Mrs. Tulman, you have a business and you have no children, so your husband's gonna be first to go to war." That's what they told me. So I thought to have children because I didn't want my husband to go..... I had to start to have children before they would take my husband. And then, I had Mildred.

My husband loved us and he took Mildred everywhere. Wherever he went, they know her better than him. Then I worked hard and he worked hard painting. He used to come home all sweaty from work and give me the money to buy material that the people wanted. He worked hard. Maybe if he didn't work so hard he would have lived longer.

But then we had to be in the store, I had servants for the children. My husband went to Pennsylvania to pick up the servants. To Cementon I think it was. I used to order, I used to pack, I used to climb up and put the stock away and all and my husband used to work and bring in the money. I like to sleep in the morning so my husband opened up the store and he used to holler, "ANNA, where's this? where's that?” because he had to work and I put it away, so I used to tell him I know upstairs where the things were.

I had Mildred and Muriel about 3 1/2 years apart. I said to my husband that I must have another child and name it after my mother. I want my mother's name, so he obliged me and God blessed me with twins. I didn't know that was a happy day. That was the happiest day of my life. Helene and Stanley. But Helene was alright. She was a beautiful baby. But Stanley, I think he must have weighed a pound and a half. So at that time they had home nurses. My husband got one for me and she used to take care of me and take care of the children. I couldn't nurse. I never nursed my kids. Helene took the food but Stanley was so weak that he couldn't even take the food so the woman said to me, "the girl eats but the boy don't wanna eat," so I went up and I stood there with a spoon about a half an hour and I fed him till he took it down. So when the doctor came and he saw Stanley, he laughed to beat the band. He couldn't get over that Stanley's living. That's how weak he was. And I think you should have a son like Stanley.

Raising a Family
I believe in having a family. You don't want to be without children. Have them while you're young.  You have friends and you have patience and you have everything. When they grow up, you take a rest.

God
I believe there's a God in heaven, I do believe. And He watches over you.
Posted by Kenneth R Marks on Sunday, May 27, 2012
Family Names Braunhart, Tulman