Isidor Heyman, my great grandfather, was a creative fellow, who designed several totally unrelated "inventions."  He has two patents that I know of, the first of which is shown below.  Designs that he has been credited with by family members include a clip-on tie device with replaceable knots of different colors; the roll-out stairs used on trains to allow passengers to embark or dis-embark; and a valise hinge that was used to build the Boston Bag that is used by doctors and was also used for shaving kits.

Just today, I found what was likely his first invention, at least his first patent. It was in 1887, while he was living in New York City.  During the course of his working life, he had a lot of different occupations, but mostly he worked with leather goods.  He founded the Bay City Bag Company after he moved his family to Oakland, California in 1910. There he made leather purses and other leather goods.

One of the first purses that he designed is seen below in his patent application, which he was awarded on April 21, 1887.  It is Patent Number 17.107.  It looks to me like a coin purse, or makeup purse.  He actually states in his application that one side is "shaped after the manner of the crown of the German military cap." It looks a little strange to me, but possibly quite functional. 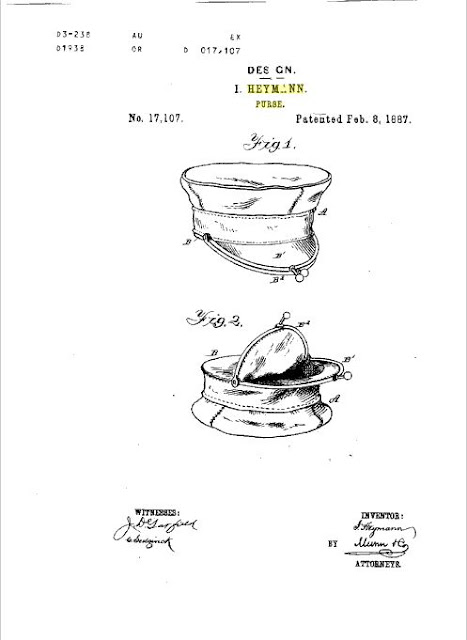