Welcome to the Newest Braun(Hart) - Grandson of Carl!

Hooray for Herbert Hart! Thank you for finding us! Or us finding you! Herb is the grandson of Carl and Hedwig Braunhart. Carl, the son of Alexander and Helene Braunhart, owned a bicycle shop in Schubin - the 1913 photo of his shop as well as several Braunhart family members is below: 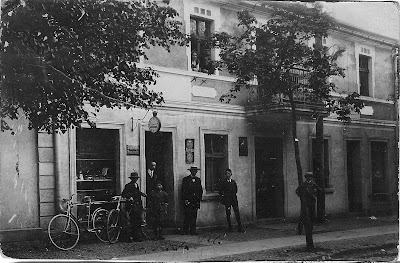 Carl is the man in the doorway. The clock bears his name. After Carl's immigration in 1938 and 1939 (he left Germany in 1938 and arrived on January 2, 1939), he opened a bicycle shop in Brooklyn. He changed his last name to Hart and refused to speak German to anyone but his family. As his only daughter had perished in Auschwitz, this reaction was certainly understandable.
So we have found a new relative. It would be silly to welcome him to a family he already has been a part of, but at least we can welcome Herb to the "genealogy" family!
Posted by Kenneth R Marks on Sunday, April 04, 2010
Family Names Braunhart