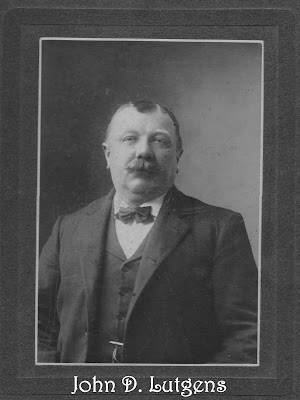 My great grandfather, John Diedrich Lutgens has created quite a challenge to find records regarding his immigration, naturalization and his parents and other ancestors. His death certificate states that he was born in 1859, while most census records state that he was born in 1853 or 1854 with his immigration year as 1874, or 1870, or 1864. Quite a difference!
According to his death certificate, he was somewhere in America for 7 years before he settled in California for the rest of his life.
Hope was renewed when my cousin Judy Crump Murdock had an ancestry DNA test done and a 5th cousin contacted her and did some research that found a Johann Diederich Luetjen that he thought might be him - however Johann was born about 80 years earlier - drat!
Anyway, "our" John Lutgens had worked at San Francisco breweries as a driver and indeed drove the old beer wagons with Clydesdales as the "engine". One family story states that his picture was in the deYoung Museum in San Francisco, but because he was German - the picture was removed during World War 2.
So great grandfather - show yourself - let us know somehow where you were from and who your parents were - please!
Posted by Kenneth R Marks on Friday, March 26, 2010
Family Names Lutgens