A Suicide, Geronimo's Knife, And A False Death

As far as I know at this time in my research into the Braunhart family, Bernhard Braunhart, nicknamed Ben, was the oldest Braunhart brother and the first to immigrate to America. He traveled here in 1857. He shows up in the 1880 census living in San Bernardino. He married Rosa Levison in 1884 in San Francisco - they had one child - Harry M. Braunhart. Harry was born in 1885 and died in 1931, living most of his life in an institution - the reason is unknown. Harry had no known wife or children. Bernhard spent some of his life in San Bernardino and other southern California locales, as well as San Francisco. As witnessed by the newspaper clipping below, somehow he had possession of one of Geronimo's knives: 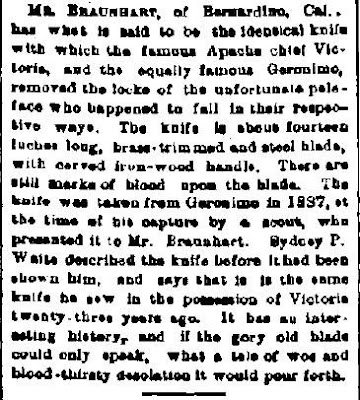 Bernhard apparently was suffering from some severe business setbacks in 1889 and was also having some difficulties at home. He decided to commit suicide and was successful as the newspaper clipping below describes: 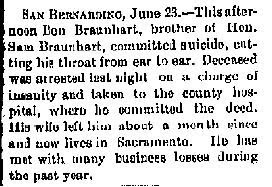 Which leaves us with the gory question - do you think that he used Geronimo's knife to do the dastardly deed?

Now the false death. Our favorite family politician - the outspoken, courageous, and feisty Samuel Braunhart made some friends and plenty of enemies during his twenty five year political career - had as the newspaper clipping below certifies, a "false" death. A premature obituary had been printed and many of his enemies had rejoiced! He actually died a few days later when a REAL obituary was printed.

More interesting to me is the possibility of a family "feud". If you notice in the article that Sam was none too pleased that Max Bernstein, one of his nephews, and the son of his sister Sara Braunhart Bernstein, decided to take charge upon hearing of his dear uncle's passing. One wonders if the displeasure was because he wasn't in fact - DEAD, or if there was an underlying family spat preceding this incident. In any case, Sam's probate records state that his estate seemed to have been left to another nephew - Jakob Braunhart, and it appears that the Bernstein clan got zero. Sam's obituary in the San Francisco Chronicle newspaper only references his "beloved" nephew, Jakob Braunhart - but then again Jakob probably gave the newspaper the info. You would think that he would have mentioned Sam's OTHER relatives. Also, interesting was the fact that Sara and Max moved to California from New York in 1906 - probably right after Sam's passing. Maybe nothing here - but it is more fun surmising about some intrigue than just birth and death dates in this genealogy game.
Posted by Kenneth R Marks on Wednesday, February 04, 2009
Family Names Bernstein, Braunhart