Another Bernhard - Another Suicide!

Bernhard (Ben) chose a less gruesome method of going out than his prior namesake - he chose morphine. According to the newspaper articles below, he had used the inheritance money from his wife's parents' estate for gambling in the Chinese lotteries that were popular at that time in the Bay Area. As he didn't have enough money to pay certain mortgages, I guess the conclusion is that he lost - in more ways than one. He left a wife, Jennie, who never remarried although living another 55 years, and two small children, Robert and Henrietta.

He was found in his chair early in the morning at one of the barber shops that he owned in Oakland. Apparently this was a planned event, as he had enough forethought to write letters to his wife and brother in law and mailed them the day before.

So I have had two ancestors named Bernhard - only two - and they both commited suicide. Quite a coincidence!

The following day, more was explained in a subsequent newspaper article that included the text of the letters that he had written. 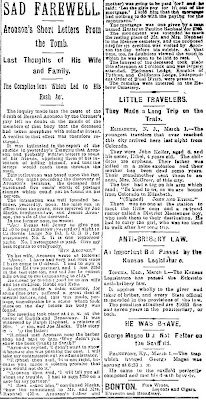