A Bizarre Tale Of A Woman Wronged

Hattie Isaacs was the granddaughter of Aaron Raphael, who was the brother of my great great grandfather Marks Raphael. Hattie was born in 1879 and was the unmarried daughter of Aaron's youngest daughter Reka - Reka's husband and Hattie's father was Jacob Isaacs.

Apparently, Hattie was seeing a young man named George Rudolph Permien in the late 1890s. Also apparently, Hattie became pregnant and Mr. Permien so it seems (at least according to Hattie) promised her that he would marry her.

When Mr. Permien refused to follow up on his "promise", Hattie called the Police and had him arrested for felony betrayal. Permien was put in jail for several months awaiting trial.

What follows next are a few newspaper articles chronicling the case. Although Mr. Permien was convicted by the jury, the judge overturned the verdict and Permien was set free.

After Hattie saw the witness list for the defense and heard the statements in support of Permien as well as what they were saying about her, she became quite distressed. So much so that her father Jacob later got in a fight with one of Permien's so called witnesses trying to protect his daughter's honor and he was arrested as well.

By the way, the baby was named Gertude Helen and was raised by Hattie and her husband of a couple of years later, John King. Upon reaching adulthood, Gertrude married George McGue, an Oakland fire inspector of many years and had three sons, Robert, Donald, and George. 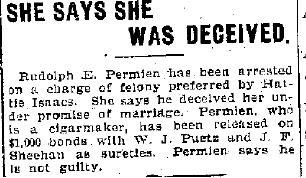 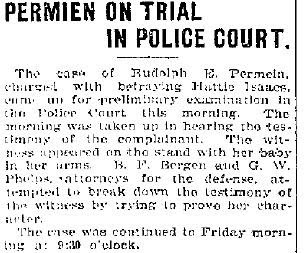 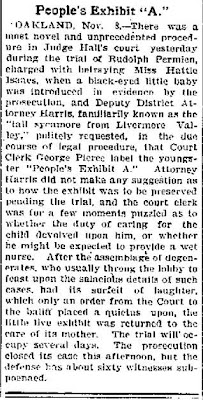 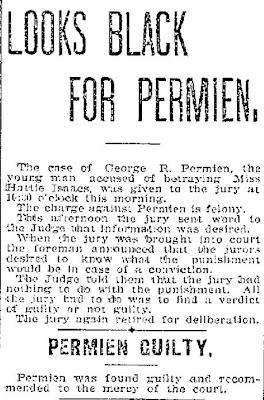 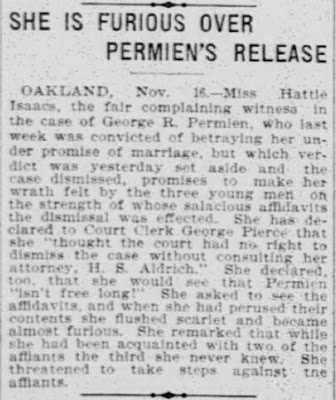