Since this is the first page regarding my genealogy research, I suppose that it is pertinent to list some key family names as well as a simple pedigree chart showing the relationships of families and ancestors.

They are as follows:

For my father's side of the family, the chart of families is below: 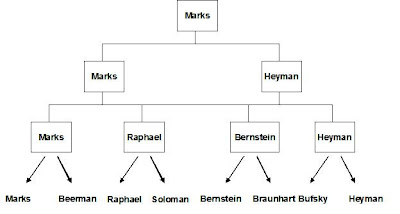 The most recent research that has been completed has been using Footnote, which has just added a great number of newspaper and city directory citations. I have spent the past week finding the many San Francisco ancestors that resided in that city in the 19th century.

The most recent "person summary" is of my great great great grandfather, Levin Jacob Braunhart, who lived in Schubin, Germany (now Szubin, Poland). He was a renowned teacher. His summary is below:
Levin Jacob Braunhart
Levin Jacob Braunhart was born in Schubin, Germany in 1806. As a fourteen year old boy, he made the journey to Berlin – to seek some instruction since he had no general education up to that time. His patron (unknown) told him that a “Verein” had been formed to instruct Jewish youths in all branches of knowledge. He became a student at the “Verein fur Kultur und Wissenschaft der Juden” (“Association for Culture and Science of the Jews”). Among the men who directed the Verien were Heinrich Heine, Leopold Zunz, Edward Gans, Moses Moser, Dr. J. Auerbach, Dr. Rubo H. Normann, Ludwig Marcus, Dr. Schonberg, and Dr. Osterreich, One of Braunhart’s fellow students was the later world famous Orientalist, Salomon Munk.
In 1828-29, Braunhart was teaching at the private houses of distinguished Jewish families in London. He was appointed principal of the Jewish school in Schubin in 1835. Two of his well known students included Moses Mielziner, who was born in Schubin and later became a well-known American Reform rabbi and author, and General von Wittich.

Later in life, Braunhart was awarded the German equivalent of knighthood by Emperor Wilhelm I, and became known as Ritter von Braunhart.

He married Minnie Zadek on February 3, 1836. There are 3 known children, and probably there are more. There were quite a few Braunharts in Schubin at the time; several of whom are not known as to their exact relationship.

The three known children were Bernhard Braunhart, Sara Braunhart, and Samuel Braunhart. All emigrated to the United States.

The following is an interesting newspaper clipping from the Atlanta Constitution in 1901:

Many thanks to my "cousin" Maxine Rudy, who provided the inspiration for the research for L. J. Braunhart. She claimed that his name was "Ritter von Braunhart". I was skeptical because I knew from his daughter's death certificate, his name was Jacob Braunhart. But she was right!
Posted by Kenneth R Marks on Saturday, January 17, 2009
Family Names Beerman, Bernstein, Braunhart, Bufsky, Heyman, Marks, Raphael, Soloman