For several years I have wondered whether my great great grandfather Louis Marks had a brother named Emil Marks. What prompted this surmise was the fact that in the San Francisco Voter Rolls of 1867, they both were naturalized on the same day. Now, I have "proof". In reviewing the San Francisco City Directories, specifically 1875, the listing for Louis Marks says "Louis Marks (Louis Marks & Bro (Emil Marks)". So there we have it.
Although I have been unable to find the immigration record for either Louis or Emil, it is apparent from census and death certificates that Louis came to America in the early to mid 1850s. He and his wife and two of his sons show up in New York in the 1860 census and in the 1870 and 1880 census in California. Since his wife Caroline Beerman came from Hesse Cassel and he from Gostyn, it is likely that they met and married in New York.
Emil worked with his good friend Simon Lust in San Francisco, and after Simon's early death worked at many different jobs. Interestingly, Emil lived at the home of Simon's widow Fannie and her children for several years after Simon's passing. Unfortunately, Emil was killed in a train accident in 1889. The clipping is below. 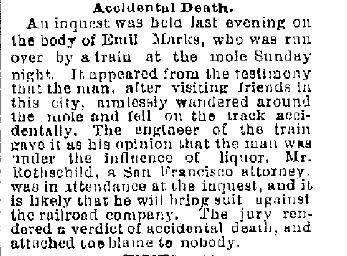 Louis was a plumber and gasfitter and also the recipient of several patents. Most notable was the 1875 patent for the "Eureka Gas Machine"

The machine was used for illumination - unfortunately Louis died in 1888 at the age of 53, and didn't reap the full benefit of his invention having been overcome by death and better solutions, the electric light bulb!
Posted by Kenneth R Marks on Monday, January 19, 2009
Family Names Beerman, Marks