The following article is a true story although the names were changed slightly. In 1942, my father, Robert J Marks and his best friend Ray Kelly, were both 21 years old and were trying to decide which branch of the armed forces that they would join to fight either the Nazis or the Japanese during World War 2. They had recently seen the John Payne and Maureen O'Hara movie "To The Shores Of Tripoli" and had jointly decided that the uniforms were pretty cool - and with the goofy decision making abilities that young men often display, decided that that was a good reason to choose the Marine Corps.

What follows is an article in the Oakland Tribune newspaper, and it is all true. 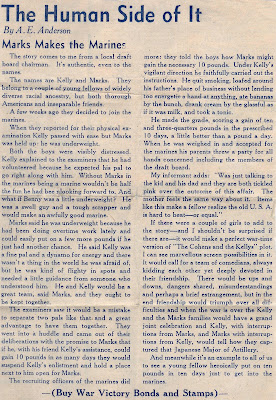