My great great grandfather, Louis Marks was the typical immigrant – hard working, ambitious and a family man. He died young, at 53, but left behind several patents and five children.

The five children were Isaac, William, Henry, Joseph, and Carrie.

Isaac was an electrician at several San Francisco theaters including the California and Curran theaters. He married Carrie Samuels and had no children.

William was more of a clerk type and ended up as a stockbroker in the early 1900s. He married Rose Roth in 1890, had one daughter, Carolyn, and was divorced by his wife in 1910 for willful neglect. No record of William has been found after 1910.

Joseph, my great grandfather, was one of those who appeared to want to be a “big shot”. He was not satisfied with the Marks Brothers’ plumbing business that he, Isaac and Henry owned in the 1880s and early 1890s. He moved to Oakland when he married my great grandmother Mollie Raphael in 1892 and dutifully was employed as a plumber at that time. When the family moved back to San Francisco in 1899, he was employed as a vaudeville agent, a gambler, as well as a stockbroker.

Carrie, the only daughter, shows up just once in the 1880 census at 11 years old. Interestingly she does not appear in the 1870 census as one might expect. There is no other record of her.

That leaves us with Henry, the third son. He was born in New York in 1863 and for most of his life was a plumber. When Joseph moved to Oakland in the 1890s he appeared to also move there. He shows up in the 1900 census as a plumber residing in Oakland.

For the past few years I have tried to research the whereabouts of both William and Henry, with little success. Just a day ago, I discovered a marriage announcement of a Henry Marks and a Celia Krengle in 1902. Nothing earth shattering there.

Through my past research I had discovered an article where a Henry Marks was convicted of basically “pimping” his wife, step daughter and step-daughter's friend. Not having any proof of a connection, I ignored the article.

Today, I decided to review the 1900 census record for Henry and found another “Boarder” who resided with him in Oakland, named Celia Krengle. Makes sense – “lived together” in the same boarding house, fell in love, got married. No big deal.

Until I revisited the “pimping” article and discovered that the mother’s name was Celia Marks and the step-daughter’s name was Emily Kleugel in one newspaper and Emily Krengle in another. Voila – unless this is the world’s greatest coincidence – my great great uncle was a convict!

Below are several articles that sum up the case. Don't confuse the last name Kleugel or Krengle. They are one and the same person. Actually a VERY SAD situation for the young girls involved. (Click on each image to enlarge it for easier reading) 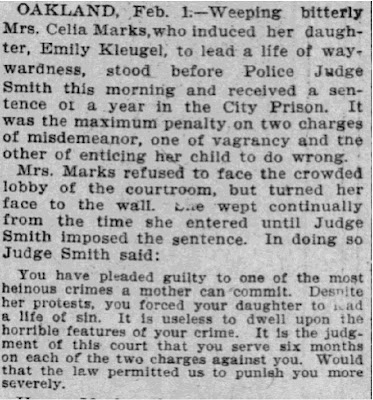 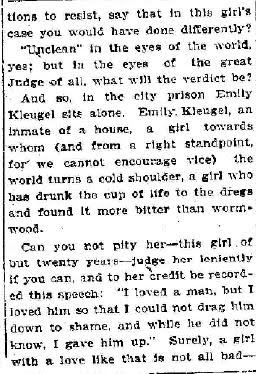