For some reason I have been "obsessed" with finding out more about the Braunhart family over the last three years. I first found out about the family when reviewing the death certificate of Sara Braunhart Bernstein, my great great grandmother. My cousin Clyde Pound made me aware of Sara's brother Samuel, who was a very successful (and outspoken I might add - but more about that in a future post) politician, when I first talked to him about genealogy about three years ago.

In a recent post I talked about the life of Levin Jacob Braunhart, the "patriarch" of the Braunhart family. So far it appears that he and his wife Minnie Zadek, had at least four children that I can name.

The first, Bernhard Braunhart, immigrated to America in 1857. He married Rosa Levison and had one son, Harry.

Sara Braunhart, our direct ancestor, married Aaron Bernstein, and it appears that after his death, she immigrated to America in 1898. She had seven children, 5 who lived to adulthood. They were: 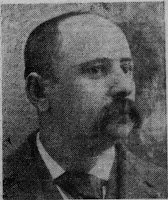 The next Braunhart was Samuel Braunhart, the San Francisco politician - he immigrated to America in 1862. He never married.


The last of Levin and Minnie's children (that I know of) was Alex Braunhart. I do not believe that he immigrated to America - but at least one of his children - Anna did - in 1909. She married Harry Tulman and had at least 4 children - Mildred, Muriel, Stanley and Helene. I have not as yet been successful in tracking this family to find out more about Anna Braunhart. She had a sister Sara Selma Braunhart, who immigrated to America in 1946 at the age of 51. I do not know as yet what happened to her.

There are a few "stragglers" that I know are related but have not been able to place as yet. Brother and sister Jakob and Martha immigrated to America in 1904. I do not know what happened to Martha but Jakob ended up in San Francisco. He was the primary heir to Samuel's fortune when Samuel died in 1906 right after the San Francisco earthquake and fire. I know that he was there from 1910 to 1913 because of Census and City Directory info. He was implicated by the FBI as a German sympathizer during World War I when he joined the U. S. Army. He also was married but that is all I know about him. I do not know who Martha and Jakob's parents are - my suspicion is Alex Braunhart, but that is just a hunch from reading Samuel Braunharts' probate file.

There also was a Carl Gustav Braunhart who was born in Schubin - but I have no info at all as to his relationship to "our" Braunhart family.
Posted by Kenneth R Marks on Friday, January 30, 2009
Family Names Braunhart, Fried, Heyman, Markheim, Tulman, Zadek